FOTOCAT Status
Physically, FOTOCAT is an Excel file of UFO and IFO cases where an image has been obtained on photo, film or video. It contains various data columns to register the date, location and country, explanation (if one exists), photographer’s name, special photographic features, references, etc. When completed, the full catalogue will be posted in internet, for an indiscriminate access to the worldwide UFO community.

187 cases have been added since the last quarterly report, these were mainly recent reports. The reader knows already that we plan to suspend contemporary entries since December 31, 2005 and concentrate on older sightings.

International Assistance
This section reports contributions received from new collaborators (or from regular ones which most recent contribution is considered outstanding). In addition to the new names cited here, many others are regularly contributing to the enlargement of FOTOCAT.

Witnesses of alleged unexplainable observations report ocasionally their recordings to us. I thank Ross Logli, who hails from Ravenshoe, Queensland (Australia), or Rodolfo Saucedo, living in El Paso, Texas, their kindness in sending their frequent photos and videos of UFOs over their home backyards. But we must take their sightings with a grain of salt, as we suspect from those fortunate mortals that claim to watch UFOs every now and then.

Thanks are due to French Thierry Rocher, a veteran ufologist and writer, for contributing items on the big 1954 wave.

Rare case material has been received from long-time friend and ufologist from New Jersey, Tom Benson.

During the week-end of October 14-15, 2005, I was invited by the organizers of the First Encounters of European Ufologists at Châlons-en-Champagne (France) to deliver a speech there. At the same time, I attended the EuroUfo close-door meeting that had been set up with the occasion. EuroUfo is a network of some 50 researchers existing since 1998, grouping individuals and organization members for 7 national associations and several more different countries in Europe.

A number of agreements were reached by the 23 participants to the colloquium, and this is the flavor of the resolution that was prepared and released to the press: 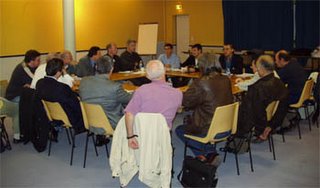 A partial view of the participants to the EuroUfo meetings.
In the course of the EuroUfo meeting, where 23 researchers participated, FOTOCAT´s overview paper (see the Documents section of this blog) was distributed and reviewed. I was happy with the feedback:

Maurizio Verga from CISU (Italy) has provided a disk with all the pictures contained in his outstanding PHOTOCAT listing for UFO photos taken in Italy.

Swiss chemist Bruno Mancusi confirmed he is preparing the Switzerland input for FOTOCAT.

Experienced French researcher Jacques Scornaux from the CNEAU group (focused on the archive preservation concept) is collecting the pertinent information from the files of retired UFO photographic expert Michel Monnerie.

The group of members from CNEGU, under coordination volunteered by Raoul Robé, are checking the current French FOTOCAT and contributing additional information.

As others colleagues have also promised their own data, I conclude that the output of this EuroUfo meeting has been more than fruitful from our pet project perspective, and I expect a quantitative and qualitative jump in FOTOCAT in the short term because of that.

On November 5 and 6, 2005, the annual conference of MUFON-CES had place in Ludwigsburg, Germany. Under the solid leadership of physicist Illobrand Von Ludwiger, this association centers on case inquiry and on theoretical physics approaches to the UFO phenomenon. Generally oriented to the indisputable reality of UFOs, there is no doubt that the abundance of doctors in sciences and engineers in the group is neatly over the average. MUFON-CES has published one dozen of their congress proceedings, unfortunately only one of these in English.

I was present in their last member’s meeting, with the attendance of over 60 persons, because Mr. Ludwiger had kindly invited me to give a lecture. A number of interesting speeches were offered, with the formal format of a follow-up technical discussion. Amongst them, I will highlight one especially here because of their relationship with UFO photography. 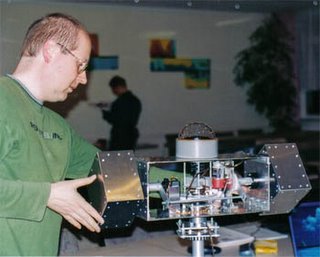 Wolfgang Stelzig and the Sky Scan prototype.
Wolfgang Stelzig is an engineer with Bosch who has designed and built a stereoscopic photographic device to capture images of potential UFOs, if they appear in the environment of a location where this observation and recording unit is installed. A working prototype is under development now and ready to be tested.

A 360º fish eye, automated camera covers the surrounding space during the 24 hours (it works at 1 frame/second). When a moving target appears, the camera sensors instruct a pan-tilt mechanism to place two digital cameras in the right position to take photographs of the target at the rate of 2-3 frames per second. It provides a stereoscopic view that also allows determining some objective magnitudes like the distance to the moving target. Recorded data are stored in a state-of-the-art computer.

However, due to the low sensitivity of the currently-used camera, the device has a limited performance at night-time. As soon as more sensitive cameras and funding are available, this problem could be easily solved.

This invention is a good technological tool for scientific-oriented UFO research and we applaud Wolfgang Stelzig and MUFON-CES for this accomplishment.

Photo Example
This section will display one instance of UFO sighting directly reported to FOTOCAT, where the images that were achieved have no explanation at this stage. 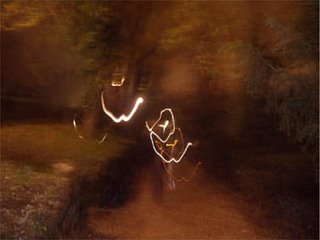 This is the accidental picture with the UFO-like light trails. 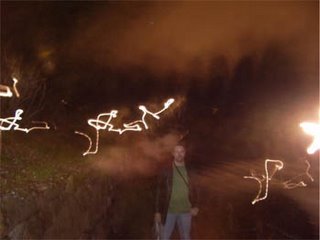 And this is the deliberate photo.
This time, the photograph received is not a properly UFO, yet it is an image that can help to the UFO students, especially those young or short-experienced in this business. It is a ghostly photo taken in Florence (Italy) by the Spain-adopted, British researcher Chris Aubeck. Chris works in the collection of material on “Magonia UFOs”, this is, old time legends and stories having to do with present-time UFO sightings. His web site http://embark.to/magonia is one I advise to consult.

On November 27, 2005, Chris writes the following to FOTOCAT Project:

“I had always wondered how this kind of photo -which I see so often in sensationalist magazines as proof of ghostly visitation- was made, and then I created one by accident. The second photo was intentional to make sure I could repeat the effect.”

“The photographs were taken using a digital camera on a slope on a damp night. I set the camera for "night" shots (which take longer as light trickles in through the lens) and walked down the slope towards the target (in the first case I walked towards my girlfriend, who had her back towards me; for the second photo we switched places). The lights you see are actually streetlights up above us, what look like trails are due to the slow shutter speed and the moving camera. The mist was not very dense but the flash illuminated the water particles in the air.”

“I realize the effects are well-known and hardly a secret, but I was impressed by how easy it was to achieve, and how common such pictures are used for "esoteric purposes." If you follow the "trails" in the accidental shot you see how one seems to pass behind a tree -something some might see as "proof" the ghostly worms were really there.”

- UFO versus IFO Cases in Countries with Largest Participation in FOTOCAT

Now I have queried FOTOCAT to divide it according to the typical UFO and IFO classifications. 3,842 cases have not been explained, at least to my knowledge (62%), and the remaining 2,350 reports are IFOs (38%).

My intention is to review if these proportions are stable in a country-by-country analysis. With this purpose, I have prepared the table above which shows the countries contributing 2% or more entries to the catalogue (i.e., over 125 incidents).

In only one source-country (Spain), the percent of IFO reports exceeds that of UFOs, with 59%. It is followed by Mexico, where IFOs score 47% of total.

My impression is that ufologists have not employed their best resources yet to scientifically analyze photographic UFO material. Why? There are two main reasons. In Spain we have worked rather intensely in the study of this type of reports and, although we are conscious that much work is still pending to be done, the Spanish ufological labor base succeeded in explaining 59% of the cases so far. Secondly, if I take from FOTOCAT those cases labeled SPACE, this is, those events reported to have been witnessed and filmed from orbiting spacecraft, the rates revealed are 64% for IFOs (52 cases) and 36% for UFOs (29 cases).

Considering the special nature of those events -the official evidence acquired by astronauts and unmanned spacecraft-, those cases have received higher analytical attention than others. Being this the case, the IFO proportion of 64% marks a horizon for reasonability in terms of expected rate of explained cases in any other sample. The fact that the present catalogue shows that explained events only reach 38% in average clearly indicates, in my opinion, that critical UFO research has been very limited in this field and that a lot of unbiased study work is still required to compensate this failure.

Invited Article
Where regularly we will include any published literary piece on curious phenomenology.

No entry this Quarter.

UFOworld News
This is a brief item report for the serious and critical-minded UFO researcher. Some selected information sources which I judge of interest for gaining knowledge from a scientifically-oriented perspective.

- Lights in the desert
One more time we suggest the reading of an article by the Italian astrophysicist Dr. Massimo Teodorani. It is entitled “IEA 2003 Report: Optical Investigation of Anomalous Light Phenomena in the Arizona Desert”.

It is basically a mission report, peer-reviewed by the International Earthlight Alliance (IEA) director, geophysicist Marsha Adams, concerning a joint scientific mission carried out during April 2003. This is the article’ s abstract:

A group of scientists composed of geophysicist Marsha Adams, technological scientist Erling Strand, and myself conducted a scientific mission to the Arizona desert in April 2003. The goal of the expedition was to test on-field team-work in difficult areas where anomalous light-phenomena have been observed, and to acquire data using several instruments including magnetometers, VLF receivers, radioactivity detectors, a weather station and optical tools for photography, video and spectroscopy. This report is the description of the results that came from the screening of optical data, which were acquired and subsequently analyzed by this author. The analysis of digital and 35mm film photographs is presented in detail. Three categories of lights were classified: conventional lights, unidentified lights and highly probable “anomalous cases”. Almost all the obtained spectra are due to well-known artificial lights. Finally, tests with a high-resolution spectrograph and optical tests with a reflector telescope are described.

- StratoCat
An Argentinean colleague and a contributor to our FOTOCAT Project, Luis Eduardo Pacheco, has launched his own web site. Named StratoCat, it is defined as a “project of historical compilation about the use of stratospheric balloons in scientific research, military applications and in airspace activity”. The pertinent url is: http://stratocat.com.ar/

This site also includes an extremely well documented section on the apparition of sounding balloons in the world that have cause misinterpretations with UFOs, and I recommend the reader not to miss it: “Sucesos OVNI relacionados” (related UFO events). A first-class job.

- 1954 UFOs
There has been published in French the article “L’Année 1954 en Photos”, La Gazette Fortéenne, Volume IV, 2005, pages 99-133. This is version #4 of a paper first released in 2004 on http://www.ikaros.org.es/fotocat1954.pdf and originally entitled “The 1954 Year in Photos”. The French, enlarged version contains reproductions of the photographs.

Your volunteer collaboration to the FOTOCAT Project is requested. Please write to: fotocat@anomalia.org

We will supply you with state, regional, provincial or national catalogs for you to check and enlarge.

If you are willing to donate photographic materials, files or literature to be preserved, feel free to use the following postal address: